Tall, bushy with large profuse flowers. An old fashion favorite that attracts all the butterflies and hummingbirds

THE TRANSLUCENT FLOWERS OF the cosmos, a favorite garden annual for generations, have been a relatively recent discovery for me. I first noticed the rose-hued flowers of Cosmos bipinnatus in rambling country gardens in the mountains of northeastern Georgia. I was captivated by the flowers’ airborne effect; they seemed to float on their tall, gently waving stalks. At dusk the whiteflowered varieties appeared as stars suspended above the feathery foliage and slender stems, which became almost invisible at twilight.

Cosmos is often described as an easy flower for beginners, as almost nothing can go wrong. Worthy types range from the rose, pink and white of C. bipinnatus to the fiery oranges and golds of C. sulphureus, both annuals, and even to the little-known, chocolate-scented black cosmos (C. atrosanguineus), a perennial in Zones 7 through 10. The cosmos is a member of the daisy or composite family, a fact not surprising given the classic daisy form of its flowers.

C. bipinnatus is a tall, sprawling plant, towering from 4 to 6 feet or more. I have grown some problem specimens that billowed taller than 6 feet and were felled by the slightest wind. With a little foresight, however, this problem can be solved by supporting taller varieties with stakes, or more sensibly, by pinching the plants back early in their development to encourage compactness.

In its most common form, C. bipinnatus has single flowers of rose, pinkish lavender, rich maroon or white. Hybridizers stay busy, however, creating new varieties. ‘Seashells’ is particularly intriguing, with its tubular petals, each flaring into a trumpet shape at the tip. The petals of ‘Candy Stripe’ are vivid white outlined with crimson, giving the look of a Christmas candy cane. ‘Daydream’ produces a misty, almost ethereal effect with its frosty pale-pink petals deepening to rose at the center.

As an added bonus, the three previously mentioned varieties average from 30 to 36 inches in height, making them a good choice for smaller gardens. Gardeners with a very small planting area would do well to try the dwarf cosmos ‘Sonata White.’ Plants of this variety grow only 2 feet in height, bearing snowy white flowers with golden yellow centers.

Evocative of the tropical climate from which it came, Cosmos sulphureus lights up gardens with a bold, bright color scheme that ranges from golden yellow to blazing orange-red. This type of cosmos tends to be sturdier than C. bipinnatus; taller varieties, however, may require support. The smallest hybrids, usually about a foot high, resemble marigolds in the garden. Two of these, ‘Ladybird’ and ‘Sunny Gold,’ are tolerant of dry weather and heat, and produce plenty of semidouble blooms until frost.

The cosmos’s dependability is certainly refreshing. Its large, easy-to-handle seeds may be sown directly in the garden and can almost always be counted on for success, a trait that is true of too few plants. Space the seeds at least an inch apart, as growth is usually quite rapid. Because it needs warm soil to germinate, cosmos should not be sown until well after the last frost of spring. Choose a site with lots of sun and sharply drained soil of average to low fertility. Fertilizers will encourage rich green foliage instead of flowers.

Plant taller varieties of cosmos well to the back of mixed borders. They are effective against walls or railings or planted as a screen. When mixing cosmos with other flowers, it helps to remember that many varieties do not reach their peak until late in the season. Drifts of cosmos mist the background of my garden in early fall, putting out their flowers alongside dahlias and chrysanthemums. Despite its fragile appearance, the cosmos makes an excellent cut flower.

Another characteristic of cosmos — one that some gardeners may consider a drawback — is its ability for rampant self-seeding. I discover seedlings in the most unexpected places, from cracks in the patio to the large compost pile in the woods. Each blossom produces a cluster of about 30 or 40 seeds that are particularly appealing to goldfinches; I often see these lovely little birds feeding on faded cosmos plants in November.

Other winged creatures are drawn to cosmos as well, including butterflies and hummingbirds, which drink nectar from their favorite crimson and maroon varieties. With the departure of the hummingbirds for warmer regions and the first frost, the cosmos season comes to an abrupt end. Discovering this carefree flower has proved a delight for me, and I look forward to its unassuming beauty every summer. 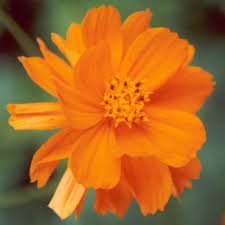